I was asked whether I watched or had recorded to watch later, some or all of the broadcast of Aretha Franklin’s funeral (held Friday, August 31, 2018). Here’s my response to that question.

No; I did not watch it, nor had I any intention of watching coverage of Aretha Franklin’s funeral. However, I did see a few very short video clips of her funeral as it was part of the local news here in Michigan (many of the Saginaw, Michigan area newspapers, and TV news and radio news stations were present at that funeral to cover it) and the ABC television network’s national evening news. I’m sure that networks like BET for example, and several internet websites will have various video clips of Aretha Franklin’s funeral. That content is sure to be available online if someday I’m ready or am willing to see and hear it.

Now, I did not know Aretha Franklin on any personal or professional level. I was – and still am, simply a lifelong fan of her work. I respected the late Queen of Soul and her music career. Aretha was not just a fellow Black American; she was an outstanding and talented individual, and a strong, independent woman. Had the opportunity to meet her presented itself, I would have been quite honored! I loved and still love most of Aretha’s music – much of which I’ve listened to since my childhood. However, as I’ve said, I did not watch the televised coverage of her funeral. In fact, I chose not to watch it. You see, I hate funerals and memorial services and will try to avoid going to such organized ceremonies which honor the dead. And since I do not like going to funerals or to memorial services (and I’m sure many other people don’t like going to them either, yet they still choose to go out of some obligation), I’d be damned if I was ever going to watch such a ceremony – not even one held for Aretha Franklin – on television.
(From this point forward, the following may offend some readers.)

As far as I’m concerned, funeral and memorial services are not for the deceased but instead are for much of the vanity, egotistical and/or religious feelings, and sensitivities of the people who are living. Many people who want to have a funeral or memorial service for some loved or admired and respected person, only want that ceremony so that they can attend said ceremony, be seen there, and perhaps – if so allowed, to even speak at the service ceremony about the deceased. I suppose that’s okay, but some people only want to use the solemn ceremony for very selfish means.

I feel some funerals and memorial services are nothing more than a human ego sideshow for some of the [living] attendees – which would include some nefarious family members with an agenda, as well as so-called “friends” and/or frenemies of the deceased (a frenemy is a person with whom one is friendly despite a fundamental dislike or rivalry); persons who might use the occasion to either deceive themselves and/or someone else with displays of sympathy and mourning as they perform the pointless yet often meaningless acts of “paying their respects” to a…. dead person. The “respect” those persons call themselves paying should have been paid when the deceased person was alive; a time when signs of respect from other living people would have been appreciated. I know that I’d certainly appreciate people showering me with lots of love, affection, tears, and favorable comments about my character, and give me sweet flowers while I’m still alive and still mentally aware to see, hear, sense, and enjoy all of it!

Being non-religious and thereby non-superstitious, I do not believe that any spirit or ghost of a dead person travels to another place of existence nor believes that person’s spirit or ghost returns to visit the living (much less returns in time to attend their own funeral or memorial service). Furthermore, I seriously doubt the dead is capable of having any interest in displays of so-called “respect” [post-death] and would be even less interested in any organized ceremony which the living has put together to honor their death. Now, whether there are a few or there are several people who are actively involved in the funeral or memorial service preparation, some or many members of the family and close friends of the deceased might feel or might be made to feel or believe that the spirit or ghost of the deceased is able to give a damn about things like funeral preparations;

It’s little wonder then why funeral and memorial service planners and directors make such big money. Death is big business! It’s quite easy to play upon the grief, stress, frustrations, confusion, and internal turmoil of a grieving family. 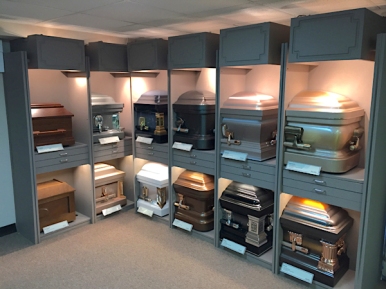 Many years ago, I promised myself to never again attend or participate in a person’s funeral or memorial service unless it was under one or all of the following three conditions:

Once again it bears repeating: funerals and memorial services are for the living. The dead…. that cold, lifeless human body that is being prepped for public display (aka a “wake”) has no say in the matter; unless of course the deceased had previously stated in a will or in some other legal or certified document, the desired details of their funeral or memorial service. Such documents may have instructions indicating the wishes of the deceased regarding things like: organ and tissue donation/dissemination, funeral or memorial service arrangements – including who is allowed/not allowed to attend said service/ceremony, and body burial or disposition (e.g., cremation) details. Often a member of the family – usually a spouse, an immediate relative, a parent of the deceased, someone with power of attorney (POA) for the deceased, or a personal or family attorney for the deceased, would be aware of such final instructions. Either that person or someone else who is recognized as the head of the family or the designated representative of the family will usually see to it that the wishes of the deceased, if any, are carried out. That person often works in concert or with the cooperation of the rest of the family to see that proper and desired funeral or memorial service arrangements for the deceased are carefully and properly planned and implemented.

In the United States, funerals and memorial services are considered private citizen type affairs; having only minor to no interference by the local and state governments other than of course, the laws in which all medical personnel, coroners, funeral and memorial service planners and directors must follow. 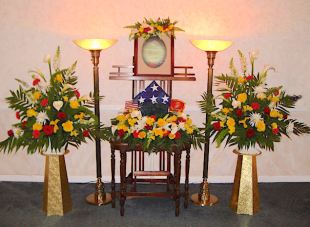 However, if for some reason the deceased had no living spouse, no relatives, or anyone legally authorized to act in his or her stead for post-death affairs (e.g. like the aforementioned organ and tissue donation/dissemination, funeral or memorial service arrangements, and body burial or disposition details, etc.), or if the deceased had no legal representation in such matters, nor any legal document indicating their post-death wishes, then the local and/or state government steps in and does whatever standing ordinance and/or state law requires in such matters.